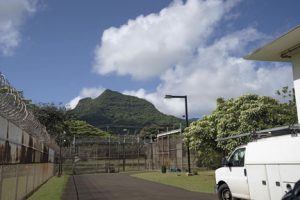 HONOLULU, HAWAII — A continuous and reliable source of hot water is a modern necessity, especially for certain commercial installations such as restaurants, hospitals, laundries and some manufacturing operations.

Another application that requires a reliable hot water supply are correctional facilities, which have cooking and laundry operations, as well as inmate hygiene use. Officials at the Oahu Community Correctional Center (OCCC) in suburban Honolulu, realized this firsthand when two 23-year-old 1,000,000 BTU boilers and two 500-gallon storage tanks reached a breaking point, jeopardizing operations.

“The last thing we want is to endanger staff safety because the facility does not have sufficient hot water,” warns Terry Visperas, program specialist with the Hawaii Department of Public Safety. This critical need prompted Visperas to work with facility maintenance staff and the state’s gas utility, Hawaii Gas, on a solution that became more urgent when the center’s second boiler failed.

“From a public health and safety perspective, reliable hot water is an essential component of this facility’s operation,” explains Visperas, who specializes in researching and integrating renewable and emerging technologies for the department. “Bad things happen when necessary systems don’t work as expected.”

To prevent a critical failure, the team leveraged the plug-and-play operation of a prefabricated multi-tankless commercial heater system from Noritz America. Shipped as a complete wall- or floor-mounted module, contractors can select from among 36 metal rack-mounted systems that are fully assembled with high efficiency condensing tankless heaters, system controllers and manifolds. Installers need only hours to connect water, gas and build vent runs, rather than days to construct a multi-unit system from scratch.

“With a Uniform Energy Factor of 0.96 efficiency rating, these 199,900 BTU/hr natural gas tankless units produce an endless supply of hot water using renewable fuel that is—depending on its source—either carbon negative or carbon neutral,” says Yee, who helped the department plan the retrofit project on behalf of the utility.

Yee worked closely with Lewis Kam and Ray Gonzalez, both maintenance supervisors at the OCCC, to plan the 12-week project that would be implemented in three stages to accommodate the 24/7 secure operation. Because the existing boilers and hot water storage tanks were failing, the first and second phases were expedited to avoid catastrophic failure.

Originally designed for 628 detainees, the OCCC facility was rebuilt and expanded more than 40 years ago to accommodate 954 detainees awaiting trial and inmates with short sentences. During the summer of 2018, the facility had a population of more than 1,222 offenders, roughly 28 percent beyond the center’s capacity.

According to Gonzalez, in addition to more users requiring hot water, most inmates shower at the same time, generating a huge surge in demand. “The existing boilers were installed in 1996 and designed to service a much smaller population than we have today,” continues Gonzalez. “Inmates housed furthest from the boilers were most likely to be forced to take cold showers.”

The first phase of the retrofit project—with six condensing tankless units—would provide potable hot water to one-third of the center’s housing modules, which accommodate roughly 400 inmates. Once complete, the second phase of the project would provide hot water to the remaining 800 inmates, by adding two prefabricated water heater banks (12 units) to replace the failing boilers and storage tanks.

The last phase would provide 12 more tankless units to recharge an existing 500-gallon storage tank that serviced the center’s laundry and kitchen operation. This option ensured unlimited hot water supplies by increasing system redundancy by a factor of 15.

Manufactured by Noritz America, all of the tankless units at the Oahu Community Correctional Center are Model No. NCC199CDV that have a maximum flow rate of 11.1 gallons per minute and gas consumption from 18,000 to 199,900 BTU/hour. The heaters offer an 11:1 Turn Down Ratio and 0.96 UEF Uniform Energy Factor, the newest measure of water heater overall efficiency. The stronger UEF would boost efficiency 34 percent above the previous heaters. The higher Turn Down Ratio offered additional heating levels; so where the existing boiler could only operate at 500,000 or 1,000,000 BTUs, the new tankless units could incrementally raise output across 11 heating levels to better meet demand. The higher the UEF value, the more efficiently a unit converts energy into heat.

“Gas is a critical fuel for Hawaii’s resiliency in emergencies and severe weather events, and we have made preparations statewide to keep our customers supplied with natural gas,” says Yee. “In fact, we haven’t lost service delivery to our customers since the Pearl Harbor Attack in 1941.”

The team then outlined their plan with contractor Mason Hasegawa, with Honolulu-based Mason’s Plumbing Service, who estimates he installs tankless heaters twice as frequently as conventional storage tank-type heaters.

“Using tankless heaters for this project was two or three times less expensive and about 100 times easier than adding a new replacement boiler and storage tank,” explains the 47-year plumbing-industry veteran.  “A new boiler would take weeks to install, cost more to operate, and still offer only 0.70-0.87 UEF; compared with a 0.96 UEF rate provided by the tankless solution.”

The move to tankless also improved the facility’s potential hot water output, with a 184 percent increase in GPM Recovery rates.

Both Hasegawa and Gonzalez were pleased with the team’s decision to install multiple tankless units, as this approach will offer a level of operational redundancy that was not previously possible.

“You see a lot of commercial and institutional applications with one or two boilers feeding storage tanks, whose total storage capacity roughly matches the peak demand of the project,” explains Gonzalez. “As a result, if one goes down, the operation doesn’t have enough hot water.”

“A multi-unit tankless job frequently involves three or more units, so each water heater contributes a smaller share of the overall demand,” he continues. “If one or even two must be valved-off for maintenance, the remaining units can activate and offset the loss in output, bringing supply much closer to maximum building demand.”

Unit redundancy was very important to ensure sufficient hot water, says Yee, who notes that Hawaii Gas supplies the OCCC with renewable natural gas that is blended with locally produced natural gas for the heaters, which can operate on either fuel type.

“From a utility perspective, we want to ensure detainees are provided with their basic human needs, and the folks who work in these facilities have the highest level of safety standards possible,” notes Yee.

Unlike traditional storage water heaters, tankless water heaters use a powerful burner and heat exchanger design to quickly heat incoming water to the set point temperature. They activate only when a fixture is turned on and cease heating once it is off. This ensures energy efficiency because the on-demand heaters are not constantly heating stored water.

Hasegawa installed the first phase of six tankless heaters that were wall-mounted, while phases two and three required a total of four floor-mounted rack units, each configured with six heaters, installed by Oahu-based Economy Plumbing.

The rack units used the same Noritz heaters as phase one, but the project team ordered the remaining modules as a fully-assembled system, designed to speed installation. The prefabricated Commercial Water Heating System combines commercial-grade tankless units with system controllers, manifolds and other necessary components and accessories into a fully assembled metal rack system that can be shipped anywhere in North America.

Especially appealing for Gonzalez is the multi-unit system controller, which stages individual heaters on and off based on hot water demand, as well as rotates their operation to ensure even usage.

The goal of the Commercial Water Heating System is to reduce installation time and expense while maximizing performance and reliability when building multi-unit tankless systems.  According to Gonzalez, the rack system brings installation as close to ‘plug-and-play” as possible for plumbing contractors.

All three applications have been meeting hot-water demands since the installations. For his part, Gonzalez is extremely pleased with choosing tankless water heaters.

“They are very good products that eliminate the need for bulky storage tanks, simplify maintenance, and significantly reduce operating costs,” he concludes.

James Facer serves as National Account Manager – Commercial for Noritz America, based at company headquarters in Fountain Valley, Calif. He may be reached at: (714) 433-2905 ext. 7812.

For more information on the full line of Noritz tankless water heating products, visit www.noritz.com. You can also telephone us at 866.766.7489 or e-mail us at [email protected].

NORITZ AMERICA CORPORATION, a subsidiary of Noritz Japan, has corporate offices in Fountain Valley, Calif., and Atlanta, offering a full line of tankless water heaters to meet the hot water demands of residential and commercial applications. Noritz supports its products with a national network of skilled representatives and employees who are committed to providing the finest products and services to our communities by helping consumers live in a more comfortable, efficient and healthy lifestyle. For more information on Noritz America and the entire line of Noritz’s ENERGY STAR® tankless water heaters, please call (877) 986-6748 or visit our website at www.noritz.com. 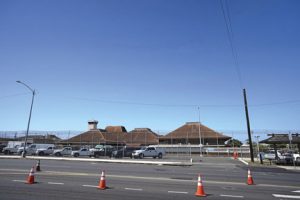 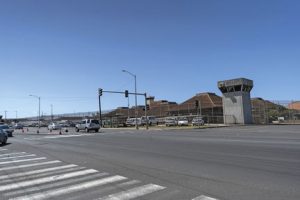 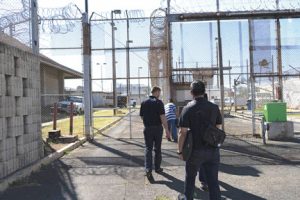 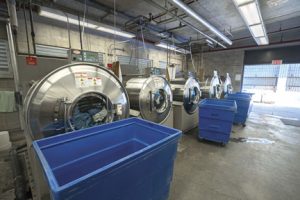 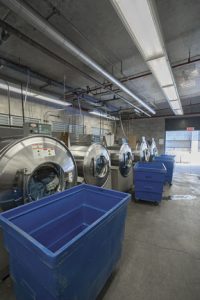 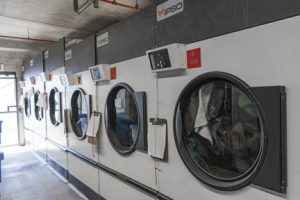 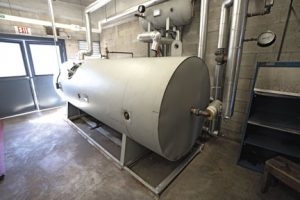 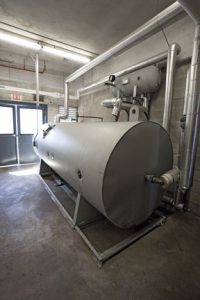 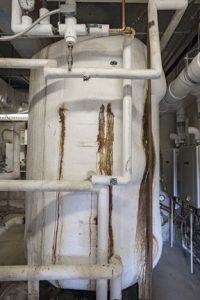 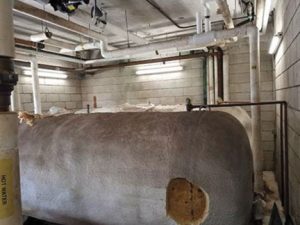 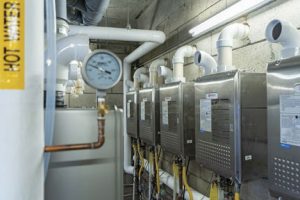 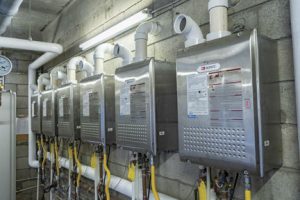 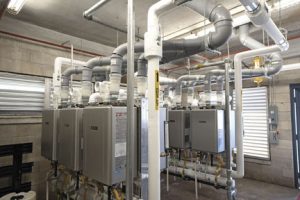 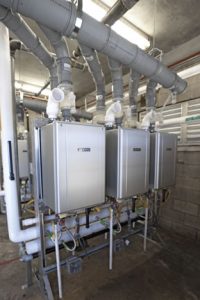 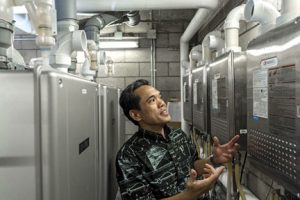 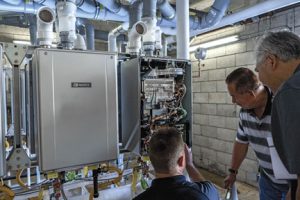 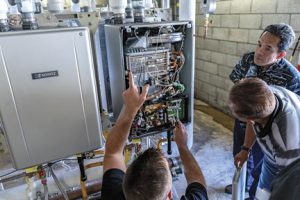 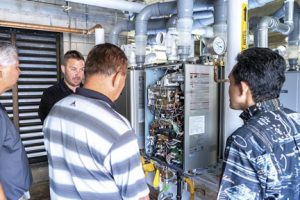 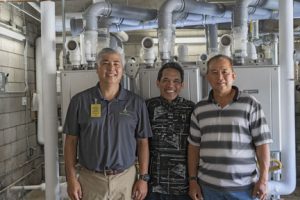 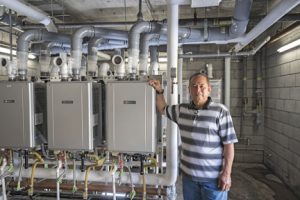 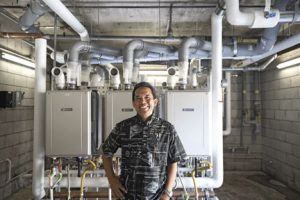 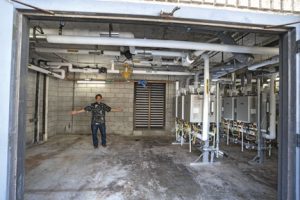 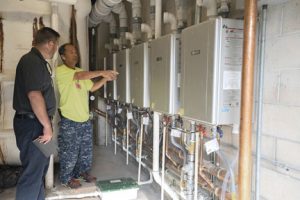 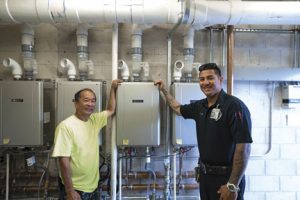 Why You Should Go Tankless Video
Deciding between tank and tankless? Maybe this will help you with your decision.